Jeffrey Deskovic, 45, talks about his experience before taking the final test for his law degree at Pace University Elisabeth Haub School of Law in White Plains May 8, 2019. Tania Savayan, tsavayan@lohud.com

It seems both improbable and inevitable that Jeffrey Deskovic would be among the 2019 graduates of Pace University Elisabeth Haub School of Law.

The legal system destroyed Deskovic's life. At 17, he was found guilty of the rape and murder of a classmate, crimes he didn't commit.

Then lawyers saved him. After years of rejections, the Innocence Project won a recheck of DNA evidence that was matched to the real killer.

On Monday, May 13, Deskovic is expected to receive his juris doctor at age 45. He acknowledges that he still has to pass the bar, but Deskovic is ready for his new chapter.

Jeffrey Deskovic, 45, talks about his experience before taking the final test for his law degree at Pace University Elisabeth Haub School of Law in White Plains May 8, 2019. Deskovic was wrongfully convicted of rape/murder of his Peekskill High School classmate. He spent 16 years in prison before he finally got permission to re-run DNA and it matched a convicted killer. (Photo: Tania Savayan/The Journal News)

Since his release in September 2006, Deskovic has finished a bachelor's degree, earned a master's degree in criminal justice and started the Jeffrey Deskovic Foundation For Justice, which has helped exonerate seven people and successfully advocated for justice reforms.

The student has also frequently been the educator: He has spoken about his own case and wrongful conviction in general at various venues, including to judges; and he has advocated for various legal reforms through legislation.

With the law degree, Deskovic said, he can do even more.

"I was tired of sitting in the front row" of the courtroom gallery, Deskovic said. "It wasn't enough anymore."

"Jeff's brought incredible value to our students and faculty," Gershman said in his third-floor office at Pace. "How can you not see this young man as a hero?" 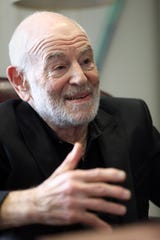 Pace University Professor Bennett Gershman talks about student Jeffrey Deskovic at Pace University Elisabeth Haub School of Law in White Plains May 8, 2019. Deskovic, who is graduating, was wrongfully convicted of rape/murder of his Peekskill High School classmate. He spent 16 years in prison before he finally got permission to re-run DNA and it matched a convicted killer. (Photo: Tania Savayan/The Journal News)

"I couldn't believe how lucky the school was to have him," Frankel said.

She later led continuing legal education courses for lawyers and judges with Deskovic, which they called Tips for Lawyers from an Exonerated Man in Law School.

"I have gotten so much feedback from so many people that it was one of the best CLEs," she said of the mandatory courses that most attorneys grouse about.

When Deskovic recalls his story in a class, during a TEDx talk, or in casual conversation, he offers a nearly dispassionate recitation of what he faced. But the facts alone can leave the listener transfixed.

The case of Jeffrey Deskovic spread injustice to everyone it touched.

Deskovic, a classmate at Peekskill High School, was 16. And police quickly took notice of him.

He was an awkward kid. Police found it suspicious that Deskovic had attended all three wakes for Correa and was observed crying and distraught over her death, according to a report ordered by the Westchester District Attorney after Deskovic's exoneration.

Officers picked him up and interrogated him for hours.He wasn't offered food,or legal representation. They administered a lie detector test and told him it proved his guilt. Then they told him to admit it and he could go free.

That false confession, from a terrified teen, became the centerpiece of the trial.

An alibi witness wasn't called. Deskovic, on the advice of his lawyer, didn't take the stand in his own defense. Prosecutorial explanations for why Deskovic's DNA didn't match what was found on the victim went unchallenged.

A jury convicted Deskovic, then 17, of rape and murder in 1990. He was subsequently sentenced to 16 years to life. At that point, he was still a sophomore in high school.

Deskovic maintained his innocence at every step. He tried several avenues to challenge, and was turned down at various turns.

Finally, Innocence Project took up his cause, but it took the intake worker three tries to get the nonprofit to fight for him. That intake worker, Maggie Taylor, is now graduating from Columbia Law School and the two are holding a joint graduation party Monday in White Plains.

At the Innocence Project's behest, Janet DiFiore, who was the Westchester distirct attorney at the time, approved running DNA in 2006 from the Correa case through the state databank. The true perpetrator was discovered: Steven Cunningham, an inmate in Eastern Correctional Facilityin Ulster County.

Then came the worst revelation: Cunningham had killed again. He was doing time for the slaying of Peekskill teacher Patricia Morrison in April 1993.

Deskovic said he has met with both the Correa and Morrison families, but he believes it is too hard for them to see him and be reminded of the loss and injustice.

Angela Correa is buried at Assumption Cemetery in Cortlandt. So is Deskovic's grandmother. Each time he visits his grandmother's grave, Deskovic said, he pays his respects to Angela.

"So many victims in this case," he reflected as he walked down East Tremont Avenue in the Bronx on a cloudy day. "The worst happened to her."

Deskovic remembers those who let him down, including Jeanine Pirro, the former district attorney who repeatedly declined to re-run DNA that led to Deskovic's exoneration.

Pirro is now the star of "Justice With Judge Jeanine" on Fox News.

"It bothers me to see Jeanine Pirro on television touting herself as a champion of justice who believes in due process," Deskovic said. "Where was she and where is she still on wrongful convictions?"

A request for comment from Pirro garnered no response.

Deskovic also was sidelined by a 1997 federal Court of Appeals ruling after his filing was four days late, due to bad information supplied by the court. One of the two judges to reject his appeal was Sonia Sotomayor, now a U.S. Supreme Court justice. Deskovic said he lacks confidence that Sotomayor will step in to ensure such cases like his get a hearing on the high court, the last chance for many to prove their evidence. Sotomayor did not respond to a request for comment.

Even DiFiore, who ordered the testing that led to the exoneration and a full review of his case, does not escape criticism. She's now chief judge of the Court of Appeals and the State of New York, the top spot in the state justice system.

"Judge DiFiore did the right thing for me," Deskovic said. But, "her body of work on wrongful convictions begins and ends with my case."

DiFiore's office wished Deskovic well "as he will now sit for the bar exam and then on to a legal career of high purpose."

Deskovic hopes his law credentials will add credibility to his foundation, which he formed in 2013.

The Deskovic Foundation was set up with a portion of settlement funds he received from Peekskill, and Westchester and Putnam counties for their roles in his wrongful conviction.

Deskovic admits he didn't know what went into running a nonprofit. "I thought because my name was on the door, nobody could question our authenticity," Deskovic said. "Donors would write checks and it would be great."

That didn't happen. Even though the foundation is scaled back — it's now operating out of a second-floor room in a Bronx building — "we had an impact," Deskovic said.

Deskovic and the foundation advocated for recent successful legislation that includes discovery reform, which demands the prosecution turn over information early on to the defense; mandatory video of interrogation for certain crimes; the establishment of a Commission on Prosecutorial Misconduct.

And prisoners seeking exoneration continue to contact them. There are now 600 "raw" cases in files waiting to be screened. Then there is a "waiting-waiting" list of prisoners who want to send their file for review.

The foundation continues to review cases, albeit slowly. If he and the volunteers find a case in which they believe a person is innocent — and they see a way to prove it — they find a lawyer who will take the case pro bono. The foundation has 11 active cases.

Deskovic is clearly uncomfortable with the wait, but he's not ready to say no to all. "I know what it's like to be on the other side of waiting." 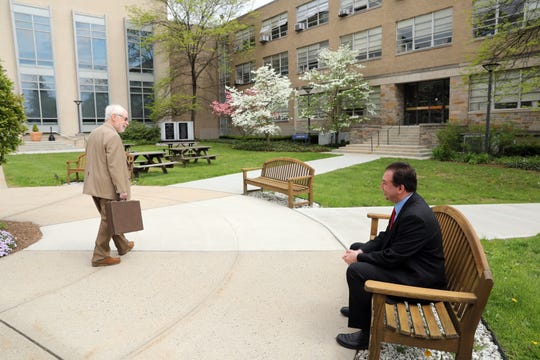 Jeffrey Deskovic, 45, right, chats with a professor before the final test for his law degree at Pace University Elisabeth Haub School of Law in White Plains May 8, 2019. Deskovic was wrongfully convicted of rape/murder of his Peekskill High School classmate. He spent 16 years in prison before he finally got permission to re-run DNA and it matched a convicted killer. (Photo: Tania Savayan/The Journal News)

The plan now, Deskovic said, is to restructure the foundation with a strong fundraising infrastructure and professional staff then relaunch it. Reflecting on the successes of the foundation, he added, "if we can get these kind of results with a shoestring budget, imagine what we could do."

Deskovic, though, is no sucker for a sob story.

"We try to be even keeled," he said. "There are plenty of cases we say no to because we think they're guilty."

He met plenty in prison. "Were there people inside who I would never want to see out? Yeah, of course."

"I've met people in prison who were different than what they were," he said. "Model prisoners."

He doesn't believe there is anything to be gained by keeping people in prison forever.

Meanwhile, Deskovic knows that raising his own profile will pay off with support for his advocacy work and foundation. He is thinking about a book, or movie or maybe a docu-series that recounts his story: "As goes my name, as goes the cause," he said.